As of 2020 the official position of Burning Man Placement is there is no area officially sanctioned as a Gayborhood, Queerborhood or other names for an area of Queer Camps. However, since 1993, through self organization most LGBTQ identified camps have collected in the 7:30 sector of the city. Placement has resisted the idea of official acknowledgement based on the idea we are all one city of citizens and they do not place camps based on group dynamics. While that sounds like politics and noise to some there are still a lot of LGBTQ people in our community that do not want it either. We are as diverse and opinionated as anyone else.

Black Rock City, Nevada is the 3rd largest city in the State of Nevada for about 9 days a year. It is where Burning Man is hosted. It has no government, but it has law because it is federal land and is policed by the Bureau of Land Management at minimum. The Placement Team at Burning Man (1) maps the city with a lot of volunteers annually and places camps with the idea they are curating culture and community. The city is modeled after a clock face with avenues and streets that link it all together. 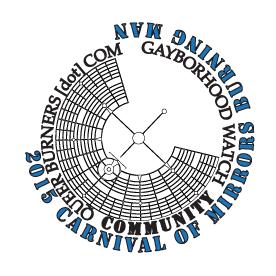 We are grateful to Duncan Rawlinson (CC BY-NC 3.0) and Wink Maltman for the header images, and many burners and friends throughout the years for their contributions to this site.